36 strategies - the swiss army knife of strategy and decision making

And now for something completely different, mixing the occidental cartomantic techniques with the ancient chinese wisdom...

When in need of analyzing and resolve a conflictual situation or redefining a business strategy, this deck - based on the famous chinese classic "The 36 Stratagems" - is a weapon of choice.

Each card has a colour identifying a type of situation among six possibilities, a unique number and an original translation of the text in english, plus a short development to put it in action more directly. It has 36 cards just like the classic Lenormand deck.

The "How To" cards details the main concept of each of the six groups, and describes 5 original reading methods developped specifically to be used with the 36 strategies deck :

If you're into card reading and know the basic drills, you can apply a five cards cross spread 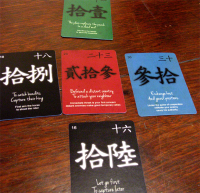 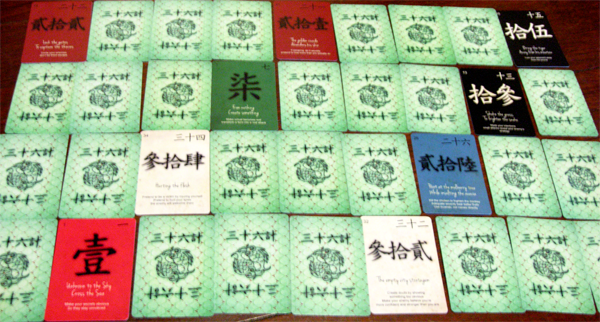 If you're into management, business strategy or personal development and wish to inject a card reading touch without being too obvious as with a RWS or a Lenormand, this is definitely the deck you want.

It can also act as a stealthy Lenormand deck as all cards are numbered.

Each card is identified by its colour, its number with the associated text and a short explanation.

in the picture above the red card belongs to the "battle already won" category (red). It bears the number 1, on the upper left in arabic numeral, on the upper right in modern chinese numeral, in the center in classic chinese nuumeral.  The text reads "Unknown to the sky, cross the sea", which is litteraly interpreted right below as "Make your secrets obvious so they stay unnoticed", meaning that your decisions and plan shouldn't appear to be overprotected and kept to secrecy, as it would attract attention, while just doing things casually won't attract the spotlights towards you. 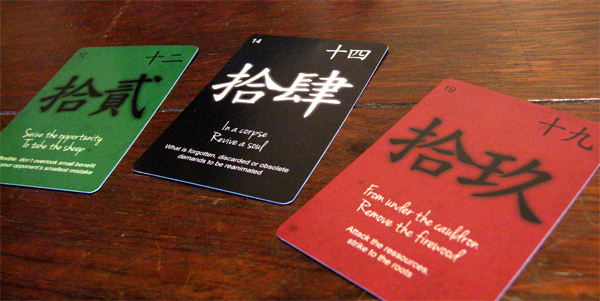 Here is a three cards spread example. The querent's question in that exemple is "how should I sell my product to relaunch my business ?".

Center card 14 black "in a corpse revive a soul" shows that the querent is planning either to sell old stocks or to rebrand an old product.

Leftmost card 12 green "seize the opportunity to take the sheep" signifies that the querent expects to accumulate small gains by keeping out of the radards, so he may be focusing too much on small benefits.

Rightmost card 19 brown "from under the cauldron remove the forewood" indicates that the querent shouldn't act greedy, and focus his energies towards enhancing the product he wants to sell without fuelling suspicions of being focused on small profits.

14+19+12 equals 45. 45 is higher than 36 so we remove 36 resulting in 9. Card 9 is in the green group "confrontations" : "from the other shore, look at the fire" meaning the best strategy is to keep developping his ideas and preparing his advertisements for a later time, while his competitors are fighting each other for the market he targets.

Another way of using this deck is to draw a single card. Let's take the more casual and trivial example of a young man with noble intentions burned by the desire of seducing a really nice person (girl or guy, your mileage may vary) but not knowing where to start. Said young man draws the 23 brown card : "befriend a distant country to attack your neighbour". If an evil rival is involved, then a weaker rival or a friend of the "target" is certainly a potential good help to honestly appear in a more flattering position than the evil rival ; if no rival is involved, then befriending a relative or friend of the target would certainly be a nice way to eliminate the gap between the querent (our young man) and the obscure object of his desire.
As a side note, this is of course an extremely trivial example, this deck should by no means be used to manipulate other people's feelings !

First edition is still available from the GameCrafter. It does NOT features the extra howto cards and the 5 reading methods ! 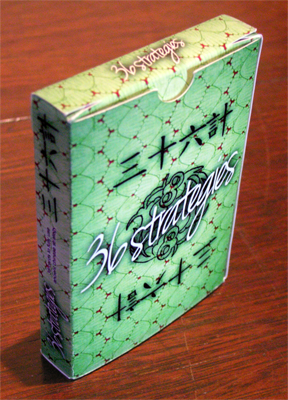 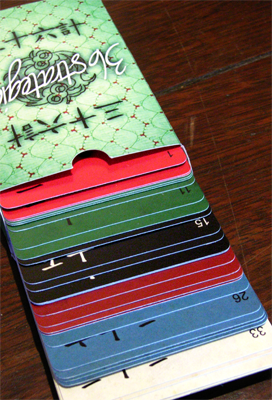 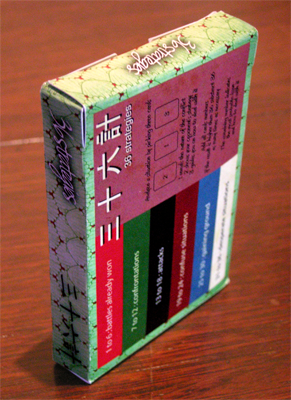 In the gamecrafter edition, only the three cards spread is explained on the tuck box, no extra "howto" cards are available.

By the same author :