Palimpsest : masc. noun, A palimpsest (/ˈpælɪmpsɛst/) is a manuscript page from a scroll or book from which the text has been scraped off and which can be used again. The word "palimpsest" comes through Latin palimpsēstus from Ancient Greek παλίμψηστος (palímpsestos, “scratched or scraped again”) originally compounded from πάλιν (palin, “again”) and ψάω (psao, “I scrape”) literally meaning “scraped clean and used again”. ( http://en.wikipedia.org/wiki/Palimpsest )

Contrary to what the name implies, that type of deck owes nothing (apart the name) to the famous french sybille Mademoiselle Marie-Anne-Adélaïde Lenormand ; this kind of deck origins are most probably to be found in « das Spiel der Hofnung » (the Game of Hope) like the one in the Brittish Museum. Even though it was named after Melle Lenormand, it differs a lot from decks like « Grand Lenormand » or « Petit Lenormand » (whose attribution to Melle Lenormand are as well very arguable).

Genesis of the Palimpsest Lenormand

Back during the summer of 2011, I tried to imagine an "emergency tarot deck" made with limited means  :

It hasn't been finished (yet ?) but inspired me to begin painting "Marseille type" (a fancy interpretation) tarot cards on a regular standard tarot deck - which has been left unfinished too (for the moment) : 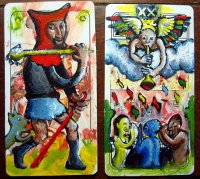 The simpler and original idea seemed more interesting, at least it had this peculiar feeling I wanted to investigate more.

While I was working on a blockprint take on the « Lenormand » deck, I felt the urge to have a more global and precise Lenormand vision. I came back to the idea of the handdrawn cards on a standard deck and adapted it to the Lenormand style, using a 54 cards deck reduced to 36, tipp-ex en pot  and pens.

From realisation to the final picture

The drawing is made by hand on standard cards whose original picture has been partially or entirely covered (hence the name). The result is then photographed and slightly adjusted with an image manipulation program to harmonize the whole deck.

Instead of having an insert in the middle of the card, the standard card association is given by the corner indices.

Here are some pictures of the first edition, now sold-out :

By the same author :